Vaping of Alcohol – What are the Effects on Blood Alcohol Concentration?

Vaping of Alcohol – What are the Effects on Blood Alcohol Concentration? 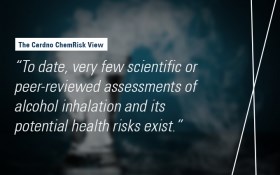 Posted on behalf of Josh Maskrey.

Alcohol inhalation via a vaporization device (“vaping”) has received substantial news coverage in the past five years (Huffington Post 2013; Metro.co.uk 2015; Daily Herald 2017). Alcohol vaping typically involves heating a wine or spirit in a closed container until the majority of the liquid evaporates and then inhaling the resulting vapor. As of 2017, 24 states have banned the sale, purchase, or use of alcohol vaporizing devices as a direct result of this perceived hazard, and five further states have restricted using these devices in commercial establishments (NAMSDL 2014). To date, very few scientific or peer-reviewed assessments of alcohol inhalation and its potential health risks exist. Stogner et al. (2014) performed a large-scale study of innovative alcohol use in young adults in the USA and concluded that alcohol inhalation, along with other alternative consumption methods, was relatively rare among members of that group. In a recent critical review, MacLean et al. (2017) performed a thorough review of the literature and found that many peer-reviewed studies focus on low-concentration occupational ethanol exposure or vapor inhalation from hand sanitizers. They concluded that acute alcohol inhalation exposure and the effects of repeated exposure to large alcohol doses remain to be characterized. In alcohol vaporization scenarios, a user may be exposed to a concentration of 50-60% alcohol in air over a period of one to four seconds. These vaping exposure scenarios differ greatly from low-intensity worker or consumer exposures over longer durations as previously described (Bruckner and Warren 2001; Dumas-Campagna et al. 2014; Nadeau et al. 2003).

Toxicologists often describe the kinetics of drug use in terms of “ADME” – absorption, distribution, metabolism, and excretion. Deliberately concentrating and inhaling alcohol vapor is fundamentally distinct from drinking alcohol, in that the absorption kinetics will be much faster via the inhalation route. Because of the faster absorption kinetics associated with inhalation, a potential exists for both a higher maximum BAC and a shorter time to reach the maximum BAC via inhalation as compared to ingestion.

The distribution, metabolism, and excretion of alcohol should be identical for both the inhalation and ingestion routes. BAC as a function of time after inhaling very high ethanol concentrations over very short exposure times has not been adequately studied to date; a quantitative description of this relationship would be useful for forensic practitioners and toxicologists, as doing so would fill a data gap in the current state of knowledge.

Cardno ChemRisk’s team of toxicologists and health risk assessment professionals have conducted research into the toxicology and kinetics of alcohol in the body following ingestion. Our primary areas of expertise include forensic modeling of BAC over time using the Widmark approach and PBPK approaches, as well as best practices for factoring changes in postmortem blood alcohol concentration into a forensic analysis. If you would like to learn more about our areas of expertise in drug and alcohol pharmacokinetics and forensic toxicology, please contact Dr. Ernest Fung.