The U.S. Environmental Protection Agency (EPA) first registered the insecticide sulfoxaflor in 2013 and approved its use in 2016, while California’s Department of Pesticide Regulation (DPR) first approved its limited use in the spring of 2020 (EPA, 2021; ). In 2019, the EPA reapproved sulfoxaflor for use(Center for Biological Diversity, 2021).

Sulfoxaflor is a sulfoximine insecticide designed to target sap-feeding pests that developed resistance to other classes of insecticides by acting as a nicotinic acetylcholine receptor (nAChR) competitive modulator or agonist (EPA, 2021; Azpiazu et al., 2021; Sparks et al., 2013). Sulfoxaflor was introduced as a safer alternative to neonicotinoids, given the increasing evidence of their negative interactions with bees and other pollinators (Azpiazu et al., 2021; Jactel et al., 2019). Studies have suggested that neonicotinoids are at least partly responsible for the colony collapse disorder syndrome (CCDS) reported in honeybees either directly or through complex interactions with bee pathogens (Jactel et al., 2019). Adverse effects to pollinators, including bees, are concerning because of  the ecosystem services that they provide. The most recognized pollinators, honeybees, have experienced a population decline in the U.S. and around the world (EPA, 2019).

While sulfoxaflor targets the same receptors as neonicotinoids, it has a different mode of action because of functional group differences, including lack of a sp3-nitrogen group and the presence of CF3 substituent (Figure 1) (Sparks et al., 2013). Aside from unique structural elements, sulfoxaflor acts on nAChRs with a distinct combination of attributes towards multiple receptors (Watson et al., 2021). 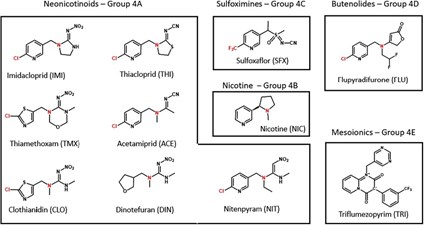 Thus, the need exists for new and safer pesticides that pose zero or minimal risk to non-target species such as bees. Ideally, such pesticide development efforts would involve studies to determine physicochemical properties and toxicity potential to bees, environmental fate and transport assessments, , screening level risk assessments using available modeling tools (e.g., BeeREX), and site-specific monitoring surveys to determine if bees could be present at application sites. Such efforts would ensure that any new, alternative pesticides are safer than their predecessors.