Posted on Behalf of  Suren Bandara 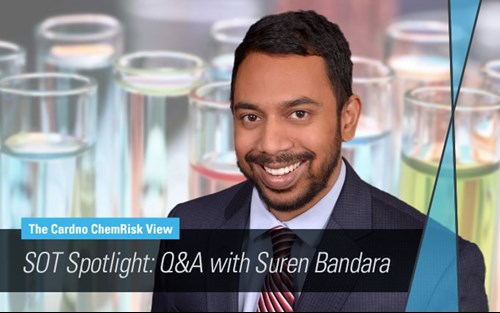 1. What was the title of your presentation?

2. What was the scope of your research?

The human ether-a-go-go (hERG) channel is a highly-expressed voltage-gated potassium channel in the human heart which plays a crucial role in cardiac action potentials. Therefore, pharmaceutical drug candidates that exhibit potent hERG channel inhibition often fail early in clinical trials. However, many drugs with both cardiac and non-cardiac indications proceed to market despite having hERG channel inhibitory activity. Here, we identified classes of drugs with hERG inhibitory activity and evaluated the relationship between their cardiac toxicity and published occupational exposure limit (OEL) to determine whether there is any correlation between hERG activity and OEL values derived.

As expected, we found that cardiac drugs with less potent hERG activity (higher IC50 values) had correspondingly higher OEL values, indicating that for cardiac drugs the OEL is likely derived based on a cardiac effect point of departure (POD). However, there was no apparent relationship between the hERG activity and OEL for non-cardiac drugs, indicating that the therapeutic effect used as the most sensitive endpoint driving OEL values for non-cardiac drugs may not have fully considered the potential cardiac effects.

4. What are the next steps/what other research is needed?

We are proposing a framework for consideration of cardiac effects when deriving OEL values for pharmaceutical drugs.