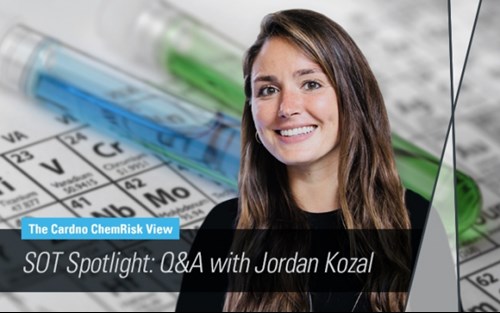 Please read below for more information on Jordan Kozal's SOT presentation regarding her research.

1. What was the title of your presentation?

2. What was the scope of your research?

This work was part of a larger effort to review, synthesize, and integrate the epidemiological, toxicological, and mechanistic evidence of carcinogenicity of EtO. The full analysis has been published and is available from Dose-Response.

3. What was the scope of your research?

This work was part of a larger effort to review, synthesize, and integrate the epidemiological, toxicological, and mechanistic evidence of carcinogenicity of EtO. The full analysis has been published and is available from Dose-Response.

IARC and EPA classified ethylene oxide (EtO) as a known human carcinogen (EPA 2016; IARC 2012). Both noted that the epidemiological evidence based on lymphoid and breast cancers was “limited” but that the evidence in animal studies was “sufficient” and “extensive” (respectively) and that EtO is genotoxic. EPA derived one of the highest published inhalation unit risk (IUR) values (3 × 10−3 per [µg/m3 EtO]) using a 2-piece, supralinear dose-response model based on transformed relative risk estimates from two epidemiological studies. EPA also derived IURs from three chronic rodent bioassays (approximately 3 to 4.55 × 10−5 per [µg/m3 EtO]); these IURs indicate a 100-fold lower potency than the IUR based on human data. Further, the EPA conducted a mode of action (MOA) analysis for EtO carcinogenicity based on the Agency’s MOA framework and concluded that “the weight of evidence supports a mutagenic MOA for EtO carcinogenicity” based on mutagenic, genotoxic, and carcinogenic outcomes in laboratory animal and human evidence.”

The objective of this presentation was to perform a focused review of the toxicological evidence of EtO’s carcinogenicity and to determine likely dose-response patterns based on 2-year cancer bioassays. Further, we sought to identify key events in the EPA’s proposed mutagenic MOA and to evaluate dose-response and interspecies differences in potency for these endpoints.

A focused review of the animal toxicology studies identified in the EPA risk assessment revealed that most of the study results were negative. This observation is in contrast with EPA’s conclusion that there is “extensive evidence of carcinogenicity in laboratory animals, including lymphohematopoietic cancers in rats and mice and mammary carcinomas in mice following inhalation exposure.”

Only one study demonstrated a clear dose-response relationship with two doses with an incidence above background— a study of leukemia in female F344 rats. F344 rats have an unusually high background rate of leukemia, which increases uncertainty in the use of this study for risk assessment. Further, the dose-response function appears to be linear at the levels tested (ie, not precluding a threshold, given the consistently negative epidemiology studies). This challenges the EPA’s use of a supralinear 2-slope dose-response function, albeit on the recalibrated epidemiological data.

EtO is expected to be mutagenic and genotoxic in both humans and animals, but there is no evidence, based on evaluation of key events, that suggests animals and humans have highly different tumorigenic response rates (ie, no interspecies pharmacokinetic correction is needed) or response patterns. Our review of the carcinogenic potential for EtO demonstrates the necessity of examining the evidence at the cellular level including an evaluation of the mode of action and key events.

The integration of the different lines of evidence does not justify deviating from the EPA’s standard dose-response guidance, that is, a modeling approach using MOA and the best available evidence.

5. What are the next steps/what other research is needed?

No planned next steps.