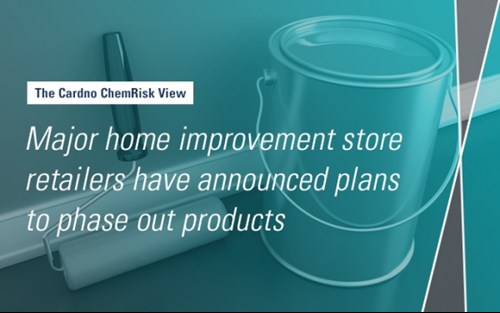 Methylene chloride, or dichloromethane, is a volatile, odorless chemical used as an industrial solvent and paint stripper. Methylene chloride is typically characterized as one of the best chemical strippers on the market because of its low cost and effectiveness (EPA 2014). It is also used in some cleaners and household products (NTP 1989). Methylene chloride exposure typically occurs as vapor absorbed through inhalation, and has been shown to have severe side effects. It is classified as a neurotoxin, and acute exposure can lead to unconsciousness, decreased psychomotor performance, and depression of the central nervous system (ATSDR 2000; Bakinson and Jones 1985). Chronic exposure has been shown to result in adverse reproductive effects, and, potentially, cancer (ATSDR 2000; Kelly 1988; EPA 2015). In severe cases, death can even occur (ATSDR 2000; Hall and Rumack 1990).

Recently, major home improvement stores have announced plans to phase out products containing this chemical, a move that likely comes as a result of methylene chloride gaining increasing attention in the media because of its involvement in multiple accidental deaths over the past few years (CBS 2018). Between 2000 and 2015, there were 17 nationally documented cases of methylene chloride-related worker deaths due to oxygen displacement by carbon monoxide in the body (OSHA 2016). The European Union in banned this chemical for most general and professional use in 2009, with exceptions allowed for professionals under strict conditions (ECHA 2009).

In early 2017, the EPA proposed a new rule under the Toxic Substances Control Act (TSCA) to prohibit the manufacture, distribution, and sale of methylene chloride in paint removal products for consumer or commercial use (EPA 2017). Some industry representatives have argued that the drawbacks of this ban would leave consumers and professionals relying on chemicals or removal methods that are less effective, and which would have their own issues as well (HSIA 2017). In May, 2018, the EPA announced its intent to finalize its rulemaking, but no official decision has been passed as of yet.

Cardno ChemRisk has extensive experience conducting assessments for human exposure to various chemicals. Our team has a number of specialists who have the ability to accurately assess the risks involved with methylene chloride in various professions or settings.