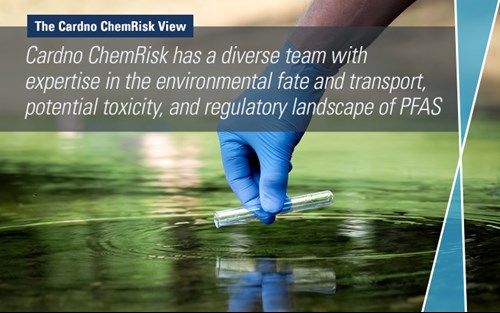 Per- and polyfluoroalkyl substances, or PFASs, are a family of synthetic (man-made) chemicals that has been used extensively since the 1950s in commercial and industrial applications. Because their unique chemical structure repels both oil and water, they have been used widely in surfactants, lubricants, paper and textile coatings, polishes, food packaging, and fire-fighting foams. Many PFASs do not degrade in the environment. Some PFASs (particularly those with a longer carbon-fluorine chain, such as perfluorooctane sulfonic acid (PFOS) and perfluorooctanoic acid (PFOA) may bioaccumulate through the food web, including in humans, and have been detected in wildlife across the globe. Unlike other persistent chemicals, PFAS are highly water soluble and tend to partition water rather than soil and sediment. Perhaps most interesting, PFASs partition predominantly to proteins in human blood rather than to lipids. While research on the toxicity of these chemicals has grown substantially during the last ten to fifteen years, there is no scientific consensus regarding the likelihood of adverse health effects in the general population.

In October of 2019, as part of its PFAS Action Plan, the U.S. Environmental Protection Agency (EPA) identified five additional PFASs for review under its Integrated Risk Information System (IRIS) program (USEPA, 2019). The five PFASs include perfluorodecanoic acid (PFDA), perfluorononanoic acid (PFNA), perfluorohexanoic acid (PFHxA), perfluorohexanesulfonate (PFHxS), and perfluorobutanoic acid (PFBA). These documents will include hazard assessments and associated toxicity value derivations (i.e., levels of PFAS exposure not associated with an increase in health risks). In the February PFAS update, EPA affirmed toxicity values would be made public this year (USEPA, 2020). In addition, exposure assessments (including water and indoor dust measurements) are being conducted by the Centers for Disease Control and Prevention (CDC) and the Agency for Toxic Substances and Disease Registry (ATSDR) in communities near current or former military bases that used PFAS for fire suppression and training (ATSDR/CDC, 2019a).

PFAS are not routinely analyzed as part of contaminated site investigations. However, if PFASs are designated as hazardous substance by EPA, which may happen as early as November, previously closed sites may be re-opened to assess PFAS contamination.Further, numerous states have developed more stringent drinking water guidance or have added PFASs to state lists of hazardous substances, along with corresponding state-specific enforceable maximum contaminant levels for drinking water.

Cardno ChemRisk has a diverse team with expertise in the environmental fate and transport, potential toxicity, and regulatory landscape of PFAS. If you would like to learn more about our capabilities, or have any further questions regarding this topic, please contact Heather Lynch.