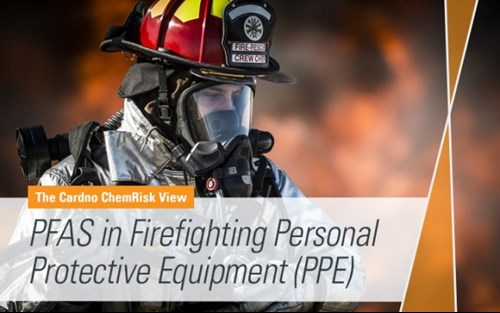 Posted on Behalf of Claire Hamaji.

Personal protective equipment (PPE) is an essential tool for many jobs in order to protect workers from exposures to chemicals, heat, and other environmental stressors. Recent research and legislative actions, however, have raised concern about potential exposures to per- and polyfluoroalkyl substances (PFASs) from using PPE, particularly in firefighting gear. As described in our recent PFAS blog, PFASs comprise a family of synthetic chemicals that have been used extensively since the 1950s in commercial and industrial applications as surfactants, lubricants, and paper and textile coatings. PFASs also are commonly used in firefighting foams and in firefighting turnout gear because of their ability to repel water and heat (Roy, 2019; Kelly, 2020; Trowbridge et al., 2020).

Research has indicated that firefighters may have an increased risk of developing some cancers relative to the general population, and PFASs in turnout gear have recently drawn attention as a potential contributor (Hensel, 2018; Trowbridge et al., 2020). Whether PFASs are effectively absorbed through the skin remains unclear, however, and the relative importance of dermal, inhalation, and hand-to-mouth ingestion exposure to PFASs from PPE still needs to be determined. Moreover, further study is needed to better understand whether exposures to PFASs from PPE would be expected to result in an increased risk of any health effects (Shane et al., 2020; ATSDR, 2019). Further, firefighters may be exposed occupationally to numerous potentially hazardous substances; determining which, if any, of these exposures may increase disease risk is therefore particularly challenging.

Furthermore, in 2019, U.S. Senators Jeanne Shaheen (D-NH) and Cory Gardner (R-CO) introduced the Guaranteeing Equipment Safety for Firefighters Act, which proposes taking significant measures to understand firefighters’ exposures to PFASs via PPE, as well as address any associated health concerns (Shaheen, 2019). The legislation proposes initiating a study to measure and identify PFASs in firefighting PPE, as well as the extent to which PFASs are released as PPE degrades. If passed, the Act would establish a federal grant program to develop alternatives to PFASs for use in PPE (Shaheen, 2019; Shaheen, n.d.). As of this writing, the bill is still under review (Congress.gov, 2019).

Some studies have reported higher concentrations of certain PFASs in the blood of firefighters, relative to the general population (Rotander et al., 2015; IPEN, 2019; Trowbridge et al., 2020).New research efforts, such as those outlined below, aim to clarify the extent to which PPE exposes firefighters to PFASs, if at all.

·       Researchers at the University of Notre Dame recently published a study assessing the potential for PFASs to migrate through and out of the different textile components of new and used firefighting PPE, as well as the potential implications for human exposure (Peaslee et al., 2020). Fluorine was detected in the moisture barrier and outer shell layer of every textile sampled, which the authors attributed to those layers’ treatment with PFASs. Additionally, fluorine was detected in the inner thermal layer of the PPE, which is typically not treated with PFASs; the authors conjectured that PFASs may have migrated from the outer, treated layers to the inner thermal layer next to the skin. The authors further concluded that the concentrations of target PFASs detected in a subset of eight textile samples demonstrated PFAS migration from the moisture barrier and outer shell to the thermal liner. However, the study included small sample sizes, and concentrations of individual PFASs were not determined for all samples.

·       Researchers at the University of Arizona, in collaboration with the University of Miami and the National Institute for Occupational Safety and Health (NIOSH), have received a $1.5 million grant from the Federal Emergency Management Agency (FEMA) to study occupational exposures to PFASs in firefighters (Kelly, 2020). The study will involve measuring different PFASs’ levels in the blood and urine of firefighters in order to assess the significance of PFAS exposures through PPE versus other exposure pathways (Kelly, 2020).

The body of research on firefighters’ exposures to PFASs through PPE is nascent, and much work needs to be done to understand whether firefighting PPE is a potential source of PFAS exposure, and, if so, through which routes. Further, because the physicochemical properties and toxicity of PFAS compounds differ, information is needed on the specific compounds to which firefighters may be exposed, and the potential magnitude of exposure(s). Additionally, exposure studies and epidemiological studies of firefighters may be confounded by non-occupational exposure to PFAS-containing food, water, dust, or air, and other hazardous substances. Stakeholders must also consider the availability and efficacy of alternative, PFAS-free turnout gear. Based on the increasing degree of political action and public attention surrounding PFASs, the topic of PFASs in firefighting PPE likely will remain the subject of continued focus for the foreseeable future.

Cardno ChemRisk has a diverse team of scientists with expertise in the environmental fate and transport, toxicology, and regulatory landscape of PFASs. If you would like to learn more about our capabilities or have any questions specifically regarding PFAS, please contact Heather Lynch. For any inquiries regarding Cardno ChemRisk’s capabilities in occupational health and safety in general, please contact Rachel Zisook.