Posted on Behalf of  Lauren Gloekler 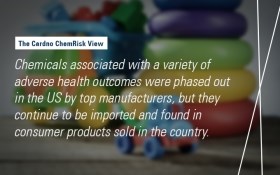 Posted on behalf of Lauren Gloekler.

A group of flame-retardant chemicals called polybrominated diphenyl ethers (PBDEs) have been produced in various commercial mixtures, commonly referred to as pentaBDE, octaBDE, and decaBDE (EPA 2017). These chemicals are associated with a variety of adverse health outcomes associated with IQ development, attention span, memory, and mental processing speed (Guardian 2017). Although these chemicals were voluntarily phased out in the U.S. by top manufacturers in 2004 and in 2013, they continue to be imported and found in consumer products sold in the U.S. (EPA 2017, Furniture World 2004, Baschuk 5/2017). Electronics recycling, or “e-waste,” can result in the PBDEs found in electronics being preserved in the plastics used in new consumer products, such as children’s toys (PR Newswire 2017, Brewerton 2017). Countries like China are involved in huge e-waste recycling activities, and in 2010 Chinese imports represented 88% of all toys imported into the U.S. (Guardian 2017, U.S. Dept of Commerce 2012).

Under the EU’s REACH law, decaBDE will be “largely prohibited” in the EU after March 2, 2019 (Gardner 2017).  In October, 2016, decaBDE was added the PBT list of chemicals to be evaluated by the U.S. EPA, under the new TSCA reform (Rizzuto 2016, Parker 2016). An EPA decision regarding decaBDE is due by June, 2019 (Parker 2016). In May, 2016, the Stockholm Convention agreed that decaBDE should be phased out and eventually banned; however, several exemptions may exist that allow these and other similar chemicals to continue to be used in certain applications (Baschuk 5/2017, Baschuk 1/2017). The International POPs Elimination Network (IPEN) criticized the Stockholm decision, saying that the policy would still allow for decaBDE to be used in contaminated recycling streams, and thus in children’s toys (Baschuk 5/2017).

Several studies have confirmed the presence of PBDEs in children’s toys from China (Chen et al. 2009, IPEN 2017). According to a 2017 IPEN survey, several children’s toys from 26 countries (many of which were purchased in China) were sampled for octaBDE and decaBDE (IPEN 2017). Ninety-one percent of the samples contained decaBDE, ranging from 1 ppm to 672 ppm, 43% of which were at levels higher than 50 ppm. Another study by Chen et al. measured much lower concentrations in 69 toys purchased from China; decaBDE was found in mean levels between 0.0003 ppm and 0.20 ppm in toys, with variation between the toy types (hard plastic vs. foam, etc.) (Chen et al. 2009). The authors concluded that the profiles of brominated flame retardants measured in the toys were “consistent with the patterns of their current production and consumption in China” (Chen et al. 2009). They also estimated that daily exposure in children to decaBDE (pg/kg bw-day) was 0.55-2.06 via inhalation, 439-5001 via mouthing, 0.51-0.73 via dermal contact, and 0.03-0.52 via oral ingestion (hand-to-mouth). Total daily exposure via all routes was significantly lower than the EPA RfD (reference dose) for decaBDE (7 X 106 pg/kg bw-day), and the hazard quotient for decaBDE was well below one (EPA 2009). The authors thus concluded that the data suggested a low risk of adverse health outcomes associated with children’s toys. Given that the IPEN study measured decaBDE in concentrations approximately 3,000 times higher than Chen et al., however, further study on the risk associated with decaBDE exposures in children from toys is warranted.

Cardno ChemRisk has assessed human exposure to many chemicals (including phthalates and lead) in children’s products. Our exposure assessment specialists are able to estimate the exposure and the potential health risk from many consumer products and provide creative and pragmatic solutions. If you have any questions or would like more information about this topic or related issues, please contact Lauren Gloekler at Lauren.Gloekler@cardno.com.