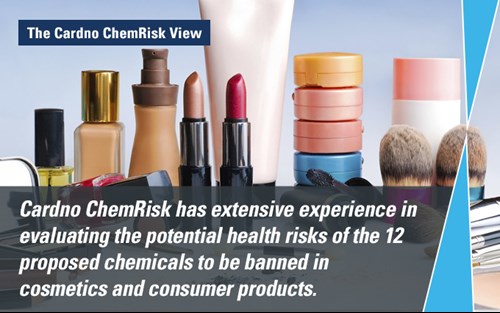 On February 20, 2020, the Toxic-Free Cosmetics Act (AB-2762) was reintroduced by the California Assembly despite failure of earlier iterations. This bill seeks to ban 12 chemicals commonly used in cosmetic and personal care products sold in California, which are associated with human health concerns and have previously been banned for use in cosmetics by the European Union. If passed, beginning January 1, 2022, any intentionally added amount of the 12 listed chemicals would be deemed adulterated under the Sherman Food, Drug, and Cosmetic Law, which prohibits the sale of adulterated cosmetics (AB-2762). Trace amounts from sources such as impurities, manufacturing, storage, or migration from packaging are exempt and not considered adulterated cosmetic products. There is also uncertainty regarding what the bill defines as “trace” amounts and if products already in production or produced before a specific date are regulated under this bill (AB-2762).

Currently, the Sherman Food, Drug and Cosmetic Law does not ban any specific chemicals found in cosmetic products; only substances that are “poisonous or deleterious” (Sherman Food, Drug and Cosmetic Law, p. 92). AB-2762 aims to expand the scope of what is considered an adulterated cosmetic product and crime under the existing Sherman Law by adding these 12 specific chemicals: (1) dibutyl phthalate, (2) diethylhexyl phthalate, (3) isobutylparaben, (4)isopropylparaben, (5) formaldehyde, (6) paraformaldehyde, (7) methylene glycol, (8) quaternium-15, (9) m-phenylenedimine and its salts, (10) o-phenylenediamine and its salts (11) per- and polyfluoroalkyl substances (PFAS): perfluorooctane sulfonate (PFOS), perfluorooctaonoic acid (PFOA), perfluorodecanoic acid (PFDA), and perfluorononanoic acid (PFNA) and their salts, and (12) mercury (AB-2762). The 12 chemicals have been classified into 5 groups based on similarity in physical and chemical properties. The applications and health hazards associated with each chemical group are discussed below:

Endocrine disrupting chemicals (EDCs), such as dibutyl phthalate, diethylhexyl phthalate, isobutylparaben, and isopropylparaben, are commonly found in personal care products such as shampoo, lotion, make-up, and shaving cream. EDCs act at low levels to mimic or block hormones, and ultimately interfere with the body’s normal functions (Schug, 2011). A wide range of health effects such as infertility, neurological delays, breast cancer, and prostate cancer, may be associated with EDCs at sufficient exposures (Monneret, 2017; Schug, 2011).

The aromatic amines m-phenylenedimine and its salts and o-phenylenediamine and its salts are common ingredients in permanent hair dye formulations due to their ability to create long lasting color in hair (Johnson, 2017; Bolt, 2007). Previous research and safety evaluations have reported that aromatic amines are associated with skin sensitization and the elicitation of allergic contact dermatitis on the scalp, face, and hands, following hair dye application(Sosted, 2013; Johnson, 2017; Li, 1996).

·  Per- and polyfluoroalkyl substances (PFAS)

Per- and polyfluoroalkyl substances (PFAS) including perfluorooctane sulfonate (PFOS), perfluorooctaonoic acid (PFOA), perfluorodecanoic acid (PFDA), perfluorononanoic acid (PFNA), and their salts are a family of approximately 4,000 to 5,000 compounds that are used extensively for a wide variety of industrial and commercial applications due to their unique water, heat, and oil resistant properties (FDA, 2019). The use of personal care products containing these chemicals may be a possible route of exposure, as measurable amounts of PFAS werefound in foundations, cosmetic powders, moisturizers, and eye shadows (Colles, 2020; Schultes, 2018). Exposure to PFAS may be associated with a variety of health effects, including reproductive, cardiovascular, immune, and endocrine disruption (Anderko, 2019; Chen, 2019).

Despite the high toxicity of mercury, mercury and its pollutants such as mercuric chloride (HgCl2), mercurous chloride (Hg2Cl2), and mercuric ammonium chloride (Hg(NH2)Cl), can still be found in many cosmetic products worldwide due to its ability to inhibit melanin production (Guo, 2020; Chan, 2020). Inorganic mercury compounds are used as an ingredient in skin-lightening cosmetic creams, shampoos, and hair conditioners (Wang, 2015).Repeated dermal exposure can result in neurotoxicity and nephrotic syndrome (Chan, 2020).

CardnoChemRisk has extensive experience in evaluating the potential health risks of the 12 proposed chemicals to be banned in cosmetics and consumer products. Our scientists have the ability to accurately assess the potential exposures from cosmetic products and their toxicological effects. We provide recommendations for screening level testing and assistance, exposure and toxicological assessments, and comparative risk calculations. For more information regarding CardnoChemRisk’s consumer products testing and assessment capabilities, please contact Dr. Sharlee More or Dr. Jillian Parker.