Marijuana Impairment and the Race to Develop an Accurate Testing Device

Marijuana Impairment and the Race to Develop an Accurate Testing Device 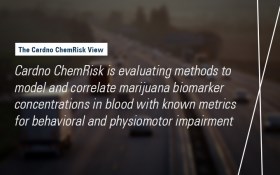 As of August 15, 2017, 29 states and Washington, D.C. have passed laws that legalize medical marijuana, and recreational marijuana is legal in eight states and Washington, D.C. These policy changes present new challenges for state regulators with respect to potentially increased impaired driving associated with marijuana use. A major hurdle in enforcing driving impairment laws is the lack of a standardized, non-invasive test that can determine a driver’s level of intoxication and impairment. Several calls for research have been put forth by various states (e.g., California and Colorado), as well as federal agencies (including the National Institute on Drug Abuse and the National Highway Traffic Safety Administration) in order to assist in determining impairment levels from marijuana use. Two companies, Hound Labs and Cannabix Technologies, are racing to develop and market instruments for detecting THC in breath (breathalyzer). While both companies have demonstrated that their devices are capable of detecting THC in breath, many challenges still exist in terms of correlating the concentration measured in breath with a driver’s impairment level.

A recent article by Lovestead and Bruno (2017) presented a three-pronged research approach for developing the “best” breathalyzer. According to the authors, these three prongs include: 1) providing fundamental data and models for the developing a breathalyzer; 2) studying the material properties in order to identify the best materials to “catch” and “release” THC; and 3) researching the chemical signature of breath that corresponds with intoxication (Lovestead and Bruno 2017). The authors found that THC and CB vapor pressures were two orders of magnitude lower than n-eicosane, a similar molecular weight compound with low vapor pressure, indicating that using surrogate data in models would have led to erroneous results. Ultimately, this finding illustrates the importance of having accurate fundamental data for developing and validating models. In light of this paper’s findings, then, although marijuana breathalyzers are near completion, ultimately identifying and establishing an impairment level will still require much work.

Cardno ChemRisk is evaluating methods based on existing published studies to model and correlate marijuana biomarker concentrations in blood with known metrics for behavioral and physiomotor impairment. Such pharmacodynamics-pharmacokinetic modeling and a better understanding of thresholds for physiomotor impairment will provide state regulators and law enforcement the necessary tools for adequately establishing and enforcing threshold impairment laws. If you would like to learn more about either these research areas, or our expertise in drug and alcohol pharmacokinetics and forensic toxicology, please contact Dr. Ernest Fung.