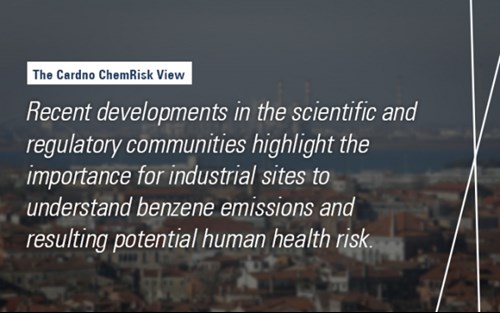 In October 2017, a group of scientists met at the International Agency for Research on Cancer (IARC) to finalize their re-evaluation of the carcinogenicity of benzene, an aromatic hydrocarbon naturally released from the processing of crude oil that was once widely used as a solvent (ATSDR 2007). IARC previously classified benzene as carcinogenic to humans based on sufficient evidence that exposures cause certain types of leukemia, including acute myeloid leukemia (AML) and acute non-lymphocytic leukemia. In the most recent update of its evaluation, IARC confirmed benzene’s carcinogenicity based on sufficient evidence in humans and experimental animals, as well as strong mechanistic evidence (Loomis et al. 2017). In addition, IARC also identified two new studies that demonstrate positive associations between AML in children and environmental exposure to benzene (Houot et al. 2014; Janitz et al. 2017).

Houot et al. (2014) evaluated the association between benzene exposure from vehicle traffic and childhood AML. The authors compared childhood leukemia cases diagnosed in France between 2002 and 2007 with contemporaneous controls. An increased odds ratio of AML was significantly associated with length of major roads, as a proxy for heavy traffic density, when stratified by estimates of benzene levels near a child’s home.

Janitz et al. (2017) found a similar association between benzene exposure and childhood acute leukemia. The authors assessed risk of acute leukemia (AL) for children born in Oklahoma between 1990 and 2010 using modeled population-based exposure to benzene from various sources, such as factories, automobiles, and lawnmowers. An observed three-fold increased unadjusted odds ratio for AL was seen in children born between 2005 and 2010. Although the association was not statistically significant and was not observed for other stratifications, including year of birth or age at diagnosis, the authors suggested that children with AML may have had increased exposures to benzene at birth.

The link between childhood AML and benzene exposure is thus based on a limited amount of evidence. But this research could mature in coming years, and could potentially impact public and scientific perceptions of risk for children raised near industrial sources. Indeed, a trend can be traced toward focusing on neighborhood benzene exposures.

Since February 2018, the approximately 140 oil refineries currently operating in the United States have been required to perform fenceline pollution monitoring for benzene, and to report results to the U.S. Environmental Protection Agency (USEPA) (Lu 2017). This regulation aims to limit fugitive benzene emissions that could potentially reach the estimated 6.1 million people living in neighborhoods within three miles of petroleum refineries (Lu 2017). The San Francisco Bay Area adopted a similar regulation in 2016 that emphasizes communicating data to residents living near refineries; refinery operators are required to continuously monitor benzene at refinery fence lines, and to report measured concentrations to the public (BAAQMD 2015).

Recent developments in the scientific and regulatory communities highlight the importance for industrial sites to develop a thorough understanding of benzene emissions for which they are responsible. This involves characterizing both present and historical benzene exposures of nearby communities, including an estimate of potential human health risk based on published literature.

Cardno ChemRisk scientists have evaluated environmental exposures to benzene and their associated potential health risks in a number of contexts, including during fracking operations. We have also derived historical benzene exposure estimates for individuals working in the oil and gas industry, and have I experience performing air monitoring for benzene and other chemicals using a variety of real-time and analytical methods Other related experience includes modeling community exposures to chemicals through various environmental media. Please contact William Cyrs, CIH at  William.Cyrs@cardno.com for more information about Cardno ChemRisk’s environmental, health, and safety capabilities.