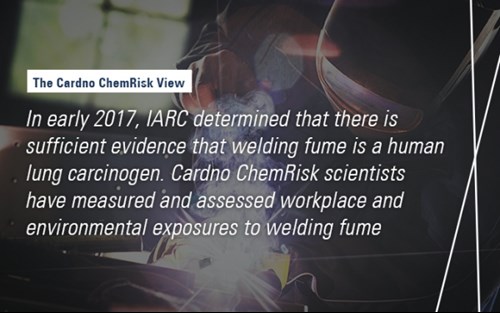 In early 2017, a group of scientists met at the International Agency for Research on Cancer (IARC) in Lyon, France to evaluate the carcinogenicity of welding fume. This evaluation included a review of relevant exposure data, studies of cancer in humans, studies of cancer in experimental animals, toxicokinetic data, and information on disease in susceptible populations. Based on this review, the IARC working group determined that  “sufficient evidence” exists that welding fume is a human lung carcinogen (Group 1) (Lancet 2017). Previously, IARC had classified welding fume as being “possibly carcinogenic to humans” (Group 2B) based on available data at the time that the mixture was evaluated in 1989 (IARC 1990).

A complicating factor in reclassifying welding fume is its complexity. Generally, welding fume is a mixture of metal fumes (i.e., iron, manganese, chromium, nickel, silicon, titanium) and gases (i.e., carbon monoxide, ozone, argon, carbon dioxide). Welding fume can contain varying concentrations of individual components that are classified as human carcinogens, including hexavalent chromium and nickel. However, the presence of such metals and the intensity of exposure to each differ significantly according to a number of variables, including the type of welding technique used and the composition of the base metal and consumable (IARC 1990). Nonetheless, IARC did not differentiate between these variables in its decision.

What actions should be taken as a result of IARC’s reclassification?

1.       Update hazard communication programs to include information regarding welding fume now being classified as a Group 1 carcinogen.

2.       Update exposure assessments for welding fume, including both for welders and nearby workers who are not engaged in welding. Given that NIOSH guidance for carcinogens aims to keep exposures as low as feasible, documenting and characterizing the potential for exposures to bystanders such as welder helpers, fire watches, or workers located adjacent to welding operations is especially important.

Cardno ChemRisk scientists have measured and assessed workplace and environmental exposures to numerous compounds, including welding fume, and have performed historical dose reconstructions or cumulative estimates of excess cancer risk in numerous occupational settings. In addition, Cardno ChemRisk scientists have experience deriving internal occupational exposure limits based on available toxicological data. If you have any questions, or would like more information about our environmental health and safety capabilities, please contact William Cyrs, CIH, at William.Cyrs@cardno.com.