Posted on Behalf of  Sarah Brown 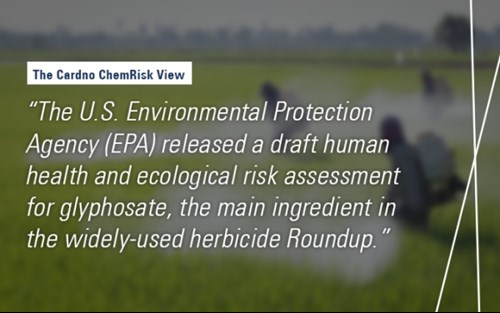 On December 18, 2017, the U.S. Environmental Protection Agency (EPA) released a draft human health and ecological risk assessment for glyphosate, the main ingredient in the widely-used herbicide Roundup produced by Monsanto. The EPA report concluded that glyphosate is “not likely to be carcinogenic to humans” (EPA, 2017). In the process of evaluating glyphosate, the EPA performed a human health risk assessment that evaluated exposures via dietary, residential/non-occupational, and occupational sources. The agency additionally performed a weight-of-evidence evaluation of animal toxicity, genotoxicity, and epidemiological studies, in addition to an ecological risk assessment. The EPA noted that although there may be potential for effects of glyphosate on mammals, birds, and terrestrial and aquatic flora, there is no potential risk to human health when the product is used according to the pesticide label.

These results are consistent with previous determinations made by the EPA in 1991 and 2016, and with results reported by international agencies, including the German Federal Institute of Risk Assessment, which indicated that glyphosate is not carcinogenic in humans. However, other agencies, including the International Agency for Research on Cancer (IARC) and the state of California, classify glyphosate as a probable human carcinogen. IARC specifically bases its conclusions on limited evidence of carcinogenicity in humans and sufficient evidence in experimental animals. The EPA will hold a 60-day open period for public comment on the draft health assessments, in part to consider any potential risk management option for glyphosate. The assessment documents are currently available on the EPA website.