Dicamba is Banned After 50 Years of Domestic Use

Dicamba is Banned After 50 Years of Domestic Use 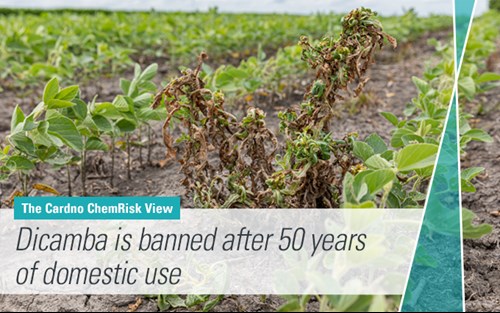 The U.S. Court of Appeals for the Ninth Circuit has decided to ban dicamba after half-a-century of domestic agricultural use.

Dicamba is an herbicide used post-emergence for selective control of broadleaf weeds (USEPA 2018a). The herbicide mimics auxins (plant hormones) to induce uncontrollable growth, leading to plant’s death (USRTK 2020). Several formulations of dicamba were introduced over the years in an effort to reduce its volatility; the most recent formulations are Xtendimax®/FeXapan® with Vapogrip® Technology and Engenia® (Hartzler, 2017). The current registrants are BASF, Bayer CropScience (formerly Monsanto), and Corteva Agriscience (formerly DuPont) (USEPA 2018a).

Dicamba was first registered in 1967, and in 2016, the U.S. Environmental Protection Agency (USEPA) first registered dicamba for applications post-emergent over-the-top (OTT) for soybean and cotton (USEPA 2018a, USRTK 2020). Prior to the registration of OTT dicamba on soybeans and cotton, about 35 million acres of agricultural land, including corn, wheat, cotton, fallow land, pasture land, sorghum, and soybean were treated with dicamba (pre-plant only). Registration of OTT dicamba allowed growers to expand the use of dicamba on soybean and cotton, which are extremely important agricultural commodities in the U.S as reflected by the significant increase in the total amount applied (~500,000 lbs/year vs. 8 million lbs/year after OTT registration) (USEPA 2018a, USEPA 2018b).

Although known for its efficacy and low toxicity potential in mammals, since its OTT registration, the number of complaints regarding crop injury attributed to off-target movement of dicamba markedly increased. Specifically, there were >3,000 complaints in 2017, and >2000 complaints in 2018. As part of its investigation into the matter, the EPA collaborated with a wide range of stakeholders and visited several states to meet with growers, researchers, and state regulators. Subsequently, the EPA and registrants agreed to additional label changes for the 2018 use season; these changes were intended to minimize the potential for off-site movement (USEPA 2018a).

On June 3, 2020, the U.S. Court of Appeals for the Ninth Circuit concluded that there were substantial fundamental flaws in EPA’s analysis of dicamba and that its risks were understated. Specifically, it was noted that EPA’s October 31, 2018 decision, and the conditional new-use registrations of XtendiMax, Engenia, and FeXapana for use on drought tolerant (DT) soybean and cotton violated the Federal Insecticide, Fungicide, and Rodenticide Act (FIFRA). It was argued that the EPA understated the amount of DT seed acreage planted in 2018, thereby understating the amount of dicamba herbicide sprayed on post-emergent crops. Further, EPA purported to be agnostic as to whether formal complaints of dicamba damage under-reported or over-reported the damage, even though evidence clearly showed that dicamba damage was substantially under-reported. Finally, EPA refused to estimate the amount of dicamba damage, characterizing such damage as “potential” and “alleged,” when evidence showed that dicamba caused substantial damage. Further, it was stated that the EPA failed to acknowledge three other risks:

As a result, the registrations for dicamba were vacated (U.S. Court of Appeals for the Ninth Circuit).

In response, the EPA has expressed its disappointment in the decision. The EPA noted that it was overwhelmed with letters and calls from concerned farmers, citing the devastation that this decision would have on their crops and the threat to America’s food supply (USEPA 2020a). The EPA also issued a clarification that growers may use existing stocks that were in their possession on June 3, 2020, until July 31, 2020 (USEPA 2020b).

It is noteworthy that even before the Ninth Circuit decision to ban dicamba, numerous lawsuits were filed or expected to be filed across the U.S., alleging crop damage due to dicamba. It is likely that many more lawsuits will follow after the decision to ban dicamba. Cardno ChemRisk scientists have extensive professional experience evaluating the possible hazards posed by chemicals, including herbicides/pesticides. For more information on Cardno ChemRisk's capabilities, please contact Dr. Andrey Massarsky or Dr. Suren Bandara.