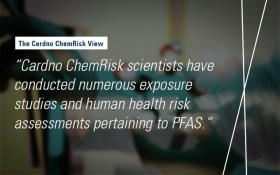 Posted on behalf of Paul Scott and Andrew Monnot.

The per- and polyfluoroalkyl substances, or PFAS, are a family of perfluorinated and polyfluorinated chemicals that have been used extensively since the 1950s in commercial applications, including surfactants, lubricants, paper and textile coatings, polishes, food packaging, and fire-fighting foams. Some of these PFAS, including perfluorooctane sulfonic acid (PFOS) and perfluorooctanoic acid (PFOA), persist in humans and the environment, and have been detected worldwide in wildlife.

Two senior toxicologists at Cardno ChemRisk, Drs. Angie Perez and Andy Monnot, presented research on key PFAS exposure and risk assessment issues at the 2017 International DIOXIN Symposia, held in Vancouver, Canada from August 21 -25th.  Dr. Perez presented a meta-analysis of crop uptake factors for PFAS. The objective of Dr. Perez’s research was to provide a state-of-the science review on PFAS uptake in plants intended for human and animal consumption, and to conduct a screening level human health risk assessment for consumption of PFAS based on the following: i) in which crops PFASs have been detected; ii) at what concentrations are PFASs detected; iii) which PFASs have been previously detected in crops; and iv) where in the plant PFASs tend to accumulate, if at all. Additionally, known sources of PFAS deposition in soil and anticipated source deposition trends, based on commercial use patterns, were described.


Dr. Monnot presented a poster entitled An Evaluation of Federal and State Perfluorooctanoic acid (PFOA) Drinking Water Standards in the US.  The purpose of this research was to compare the federal and state drinking water standards for PFOA in light of the recent US EPA lifetime drinking water Health Advisory for PFOA of 0.01 µg/L.  A total of 10 PFOA drinking water standards were identified, ranging from 0.014 to 1.6 µg/L.  Each state used a variety of different assumptions to derive its PFOA drinking water standards. We found that only rarely was there any attempt to evaluate background exposures to PFOA; instead, most states employed a single “default” relative source contribution (RSC) factor, which may over-estimate PFOA’s true background exposures.

A third poster, authored by Paul K. Scott, a senior risk assessor and expert statistician at Cardno ChemRisk with over 26 years’ experience, was presented by Dr. Monnot and titled A Probabilistic Evaluation of the 2016 U.S. EPA Health Advisory for Perfluorooctanoic Acid. The purpose of this analysis was to determine if some of the factors used to derive the US EPA health advisory for PFOA resulted in an overestimation of exposure and subsequent risk.  Specifically, Scott et al. determined that the relative source contribution (RSC) factor used by the US EPA is not consistent with the information in the scientific literature on background exposures to PFOA from non-drinking water sources. In this study, alternate values for the health advisory were calculated based on more realistic assumptions for the relative source contribution (RSC).  Using alternate values for the drinking water ingestion rate and the RSC resulted in health advisories for lactating women that ranged from 0.2 to 0.76 µg/L, and for the general population that ranged from 0.3 to 1.1 µg/L.  These results suggest that the US EPA used overly conservative assumptions when deriving its health advisory.

Cardno ChemRisk scientists have conducted numerous exposure studies and human health risk assessments pertaining to PFAS. Examples of Cardno ChemRisk’s key PFAS projects include a retrospective exposure assessment for PFOA; a critical review of the findings of the C8 Health Project panel; preparation of supporting documents for Canadian Soil Quality Guidelines; preparation of estimated daily intakes of PFAS from outdoor and indoor air, dust, soil, food, drinking water, and consumer products; and a hazard evaluation and human health risk assessment for a farm after 20 years of land application of biosolids. Cardno ChemRisk scientists also regularly present on the topic of PFAS. Recently, Dr. Perez presented a webinar with Earl Hagström of Sedgwick Law in San Francisco titled Beyond PFOA and PFOS — the Next Wave of Perfluorochemicals-Related Liability”.

If you would like to learn more about our PFAS capabilities, please contact Paul Scott at paul.k.scott@cardno.com.