Posted on Behalf of  Jillian Parker 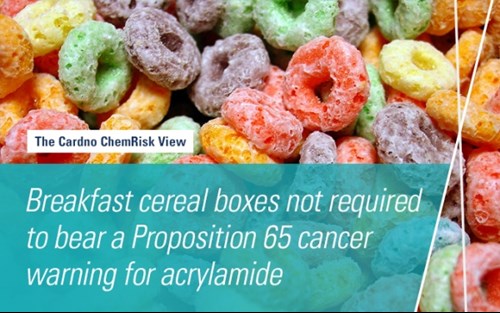 Posted on behalf of Jillian Parker.

According to a recent decision from a California appeals court, breakfast cereal boxes are not required to bear a Proposition 65 cancer warning for acrylamide, a chemical that has been classified by the International Agency for Research on Cancer (IARC) as “probably carcinogenic to humans” since 1994 (Boysen 2018a; IARC 1994). Whether or not cancer warning labels should be required for other food products containing acrylamide, such as coffee, has been the subject of recent court rulings in California, and of regulations proposed by the California Office of Environmental Health Hazard Assessment (OEHHA) (Boysen 2018b; OEHHA 2018).

Acrylamide was added to Proposition 65’s list of chemicals known to cause cancer in 1990 (OEHHA 2018). This chemical is produced naturally when starchy foods rich in carbohydrates, such as breakfast cereals, are cooked at high temperatures (Tareke et al. 2002). A 2010 EPA study noted that due to acrylamide’s inherent formation as a result of standard cooking methods, it “has been in the human diet for many thousands of years” (EPA, 2010). The role of acrylamide in increasing the risk of cancer in humans has been widely debated (Cancer Research UK 2016). Despite animal studies showing that high doses of acrylamide (e.g., those 1,000 to 10,000 times higher than dietary levels) have carcinogenic effects, evidence from human studies has not shown a definitive link between dietary acrylamide intake and increased risk for most cancer types (American Cancer Society 2016; Xu et al. 2014).

In the cereal decision, a panel of three judges concluded that cereal manufactures are protected under federal law from being forced to include a cancer warning on their product, as doing so would directly contradict federal policy goals aimed at promoting whole grain consumption (Boysen 2018a). The court specifically pointed to FDA policy, and cautioned that no Proposition 65 warning “should be placed on foods, including breakfast cereals, unless and until the science supports such a warning” (Todd 2018). Beginning in 2003, the U.S. FDA advised against mandating a Proposition 65 acrylamide warning on food products, stating that “premature labeling of many foods with warnings about dangerous levels of acrylamide would confuse and could potentially mislead consumers,” and “[c]onsumers who avoid eating some of these foods, such as breads and cereals, may encounter greater risks because they would have less fiber and other beneficial nutrients” (FDA 2003). The FDA continues to caution against Proposition 65 acrylamide-labeling of cereals and other food products containing whole grains, stating that “[r]educing whole grain content may also reduce acrylamide, but FDA does not recommend this approach given the benefits of whole grains” (FDA 2016). Whether the precedent established in this breakfast cereal case will be applied to other food products when determining the need for a Proposition 65 warning label remains to be seen, provided scientific evidence shows that consuming these food products does not lead to an increased cancer risk.