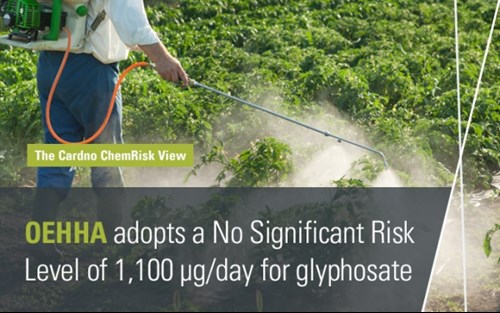 Posted on behalf of Melinda Hoang

Glyphosate is an herbicide used throughout the world for its effectiveness in weed control (IARC 2015). It consistently ranked as the second most commonly used pesticide in the United States in the home and garden market sector between 2009 and 2012 (EPA 2017). On July 7, 2017, glyphosate was added to the Proposition 65 list as known to the state of California to cause cancer (OEHHA 2017). California’s Office of Environmental Health Hazard Assessment (OEHHA) adopted a No Significant Risk Level (NSRL) of 1,100 micrograms per day (µg/day) on April 6, 2018, which became effective on July 1, 2018 (OEHHA 2018).

To determine the NSRL, OEHHA relied on Volume 112 of the International Agency for Research on Cancer (IARC) Monographs on the Evaluation of Carcinogenic Risks to Humans, entitled “Some Organophosphate Insecticides and Herbicides: Diazinon, Glyphosate, Malathion, Parathion, and Tetrachlorvinphos” (IARC 2015). which summarizes the available data relevant to the carcinogenic activity of glyphosate. OEHHA’s development of the NSRL is based on a 1993 study by Atkinson et al. In this study, mice were fed various doses of glyphosate (purity, 98.6%) for two years. The authors identified a no-observed adverse-effect-level (NOAEL) in both males and females of 1000 mg/kg body weight per day (JMPR 2006; Atkinson et al. 1993).

Recently, glyphosate was in the news for a law suit in which a jury determined that glyphosate contributed to an individual's lymphoma, subsequently awarding the plaintiff $289 million in damages (Law360 2018). However, multiple epidemiological studies over the past two decades report that there is no causal link between glyphosate and cancer or any non-cancerous diseases (Chang and Delzell 2016; De Roos et al. 2005; Mink et al. 2011; Mink et al. 2012). Additionally, Dr. Gary Marsh, Professor of Biostatistics at the University of Pittsburgh, Graduate School of Public Health and Consulting Senior Science Advisory for Epidemiology at Cardno ChemRisk, was part of scientific expert panel that conducted a systematic literature review to evaluate the relationship between glyphosate exposure and non-Hodgkin’s lymphoma or multiple myeloma. The expert panel reported that the epidemiological literature does not support the conclusion that glyphosate exposure causes lymphoma or multiple myeloma (Acquavella et al. 2016).