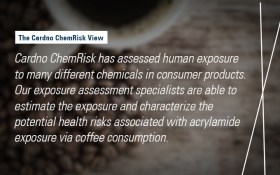 Acrylamide is a chemical primarily used in industrial processes for its water-soluble and thickening properties, such as in the manufacturing of paper and plastic and in treating drinking water and wastewater (Lineback et al. 2012).  In 1994, the International Agency for Research on Cancer (IARC) classified acrylamide as “probably carcinogenic to humans” (IARC 1994).  Acrylamide is characterized as being neurotoxic, and its main metabolite, glycidamide, has been associated with genotoxicity.  In 2002, the Swedish National Food Administration reported the presence of high acrylamide levels in certain types of food (Tareke et al. 2002).  Acrylamide is mainly formed as part of the Maillard reaction, in which reducing sugars such as glucose and fructose react with amino acids at temperatures above 120°C in thermal food treatments such as frying, baking, and roasting (Lineback et al. 2012).  Previous studies have reported cancer as well as reproductive and developmental effects in laboratory animals exposed to acrylamide, which led California to add acrylamide to its Prop 65 list of chemicals known to the state to cause cancer or reproductive toxicity.

Acrylamide is currently receiving widespread attention in media reports due to its formation in coffee.  Many studies have analyzed acrylamide levels in different brands and types of coffee as well as potential factors that may affect acrylamide levels in coffee, such as the coffee variety, ripeness of the coffee bean, roasting process, and storage conditions (Alves et al. 2010; Lantz et al. 2006).  However, very few studies have estimated the potential acrylamide exposure from daily intake of coffee, and even fewer studies have conducted a human health risk assessment to determine the potential cancer risk from lifetime exposure to coffee.

In 2004, the U.S. FDA published an article reporting acrylamide levels in brewed coffee; however, the agency did not estimate U.S. consumers’ total daily intake of acrylamide or calculate their potential risk from lifetime exposure based on these numbers (Andrzejewski et al. 2004).  Since then, many new coffee products and non-traditional brewing methods have entered the market and gained popularity in the U.S.  While quantitative risk assessments of traditional coffee products have been conducted for populations outside the U.S., there remain data gaps for quantifying acrylamide in key coffee products distributed within the U.S., and for understanding the risk of cancer associated with exposure to these products.

Cardno ChemRisk has assessed human exposure to many different chemicals in consumer products.  Our exposure assessment specialists are able to estimate the exposure and characterize the potential health risks associated with acrylamide exposure via coffee consumption.  If you would like to learn more about our capabilities or have any questions about this topic, please contact Rachel Novick at rachel.novick@cardno.com.