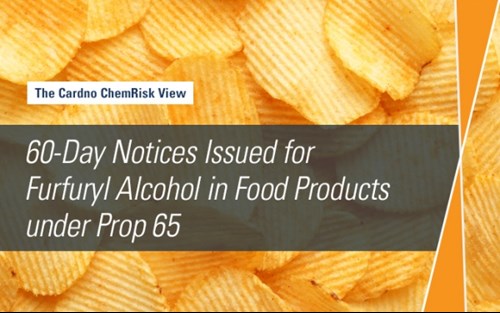 Since November, 2017, there have been seven 60-Day Notices issued regarding furfuryl alcohol in food products (OAG 2018; OEHHA 2017; Consumer Products Law 2015).  These products include dried meat, poultry products, and flavored chips and snacks. California’s Prop 65 is officially known as the Safe Drinking Water and Toxic Enforcement Act of 1986, which requires a warning before exposing an individual, at certain doses, to chemicals known to the state to cause cancer, birth defects, or other reproductive harm (OEHHA).

Furfuryl alcohol was added to California’s Prop 65 list of chemicals on August 21, 2015, and became effective on September 30, 2016, following the US Environmental Protection Agency’s formal identification of fit as a cancer causing chemical (OEHHA 2016).

Furfuryl alcohol is found in foods such as canned foods, coffee, tea, cocoa, milk, nuts, breads, popcorn, and vegetables (FDA 2007; OSHA 2006; Franko et al. 2012). Furfuryl alcohol is formed in foods during thermal processing and via the dehydration of sugars (OEHHA 2015). While the formation of furans such as furfuryl alcohol is not well understood, it has been suggested by Becalski et al. and Locas et al. that it forms during oxidation of polyunsaturated fatty acids, breakdown of ascorbic acid derivatives, breakdown of carbohydrates, and breakdown of amino acids in the presence or absence of reducing sugars (Locas et al. 2004; Becalski et al. 2005; FDA 2007).  Very few studies have measured furfuryl alcohol levels in foods; thus the level of furfuryl alcohol in various foods are unknown. Furthermore, furfuryl alcohol concentrations are difficult to measure from food and beverage heating processes (NCA).While the National Institute of Occupational Safety and Health (NIOSH) has set Occupational Exposure Limits (OELs) for furfuryl alcohol, a safe harbor level (No Significant Risk Level (NSRL)) has yet to be established for it by the Office of Environmental Health Hazard Assessment (OEHHA) (NIOSH 2014). As such, food and beverage companies may need to perform a risk assessment and develop their own acceptable level of furfuryl alcohol for their food products. Similar to acrylamide, furfuryl alcohol has undergone a wave of litigation recently, even though the compounds form during heat processing, and neither have been federally regulated.

Cardno ChemRisk has evaluated potential human exposure to various chemicals in foods. Our exposure assessment specialists are able to estimate the exposure and characterize the potential health risks associated with furfuryl alcohol from food and beverage consumption. If you would like to learn more about our capabilities or have any questions about this topic, please contact Rachel Novick.